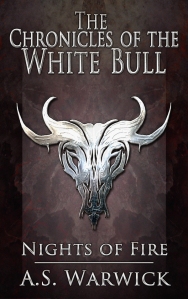 Snows and winds lashed at them as they followed the yhara-te up mountain paths, the sky darkening with both heavy clouds and the ending day. Nhaqosa peered through the weather, trying to follow where they were headed. Snow capped crags rose up sheer around them, and precipitous slopes dropped away, fading into the clouds, and all about spread the endless vista of grey and white. It would not do to be lost up there, not with the weather turning for the worst. Nhaqosa knew all he could do was hope that soon they would find a place of shelter, for his companions were beginning to suffer, shivering as each fresh blast of wind buffeted them. He had been too eager in his desires and had not allowed sufficient time to properly prepare for the weather that they were new encountering, an error for which he chided himself.

Follow this link for Part Seven of Nights of Fire