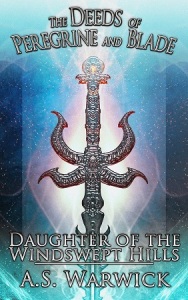 It dawned grey with the arrival of the following day, rolling clouds sweeping down from the mountains and across the hills, while distant peals of thunder rumbled ominously over the peaks. Down from the hills marched the implacable host of the gathered Aedring, numbering in their hundreds, even unto a thousand, making for the Ishmarite city of Abas Sul. Hraega led them, his hammer over his shoulder. Beneath his armour his ribs had been taped up tight, though he did not let them slow him down, marching on stolidly. Fianna accompanied him at the front of the advance, while their clan took the vanguard, as was their right by tradition.

They were a fearsome sight to behold, men and women of all ages, wiry, hard faced, toughened by the elements and the wilds of the hills and a thousand generations of barbarian heritage, outsiders to the civilised races of the lowland cities. Each bore unique arms and harness so that the whole was a mass of weapons of dozens of varieties, bristling with spikes and shafts and more.

Long had it been since the lowlanders had suffered a raid of such magnitude, such unstoppable fury and vengeance, for the Aedring were proud of the individualism and freedom, bowing to none, and jealous of their lands and heritage. When they followed, it was out of honour, respect and strength.

Around the foothills none dared live, for any who tried to do so found their lands raided, their crops and livestock stolen and their dwelling burned. Those who fought died, but those who didn’t were simply expelled, for the Aedring did not believe in slavery, nor cruelty for cruelties sake. They would not brook others living on what they considered their lands though.

Seldom did the Aedring come down into those lands either, for the cities sent regular patrols of horse to sweep across them, and ever had cavalry troubled the Aedring. Each clan was too few in number to fight off the cities alone, and rare it was that they come together. Thus the lands were left wild and untamed and unclaimed.

This raid, though, was from no single village or clan, but the collective might of the Aedring, in numbers not great enough to fight off a coalition of cities, but enough that one city alone would fall to them, its riches plundered, enough for a generation.

The first day of marching went uneventful, and not until early in their second day did they come across their first signs of civilisation upon the plains. By the banks of one of the tributaries that fed the great river of Far’hadal, a recently built watchtower stood, overlooking a cluster of small wooden buildings. Great piles of lumber were stacked among them, taken from a nearby small forest, where could be seen the evidence of axes at work, for its eaves had been pushed back.

As they drew closer, from the tower came the report of a horn, sounding long warning blasts.

With echoing shouts, the Aedring masses surged forward without semblance of order, running hard as they swarmed towards the small outpost. Spears and swords, hammers and axes were shaken in the air and the ground rumbled beneath their feet. As Fianna ran alongside them, she could see activity among the buildings. Men spilled from them, and from the watchtower, racing down towards the tributary. A boat had been moored there, half loaded with timber, into which the men piled, scrambling for safety.

“They flee by boat!” she called out. “They will warn Abas Sul.”

Hraega laughed as he reached the edge of the outpost, watching as desperate men poled away from the shore and out into the current, ducking low behind the sides of the boat to find what cover they could. The current caught them and tugged them along, drawing them away from the Aedring.

“This leads not to Abas Sul,” Hraega told her, “But to an Akuvian city, Colanium. They are no friends of Abas Sul, and will send no warning to her.”

A splintering crash came from nearby as the Aedring hillsmen overran the outpost, taking axes to doors to break into the buildings.

“No fires!” Hraega bellowed. “Warn the fools to start no fires else our presence will be given away to Abas Sul.”

They found the outpost completely abandoned. No man had been willing to risk their lives against the Aedring for such a place. The Aedring thoroughly ransacked it, leaving it a broken, shattered remnant of what it had been. Any loot discovered was dragged out and laid before Hraega for his clan to hold onto. Once they had returned to the hills, Hraega would see it split evenly between the clans.

When at last the place had been reduced to a memory, they headed off for Abas Sul once more.