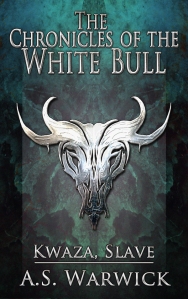 Misty white clouds flowed across the hills, a rolling, silent shroud that blanketed the land. Rocky outcrops stuck up here and there, emerging from among the heather that grew thick, while tarns and small flowing waterways dotted the landscape about.

A figure made his way through the mists, tall and broad of shoulder, walking across the hills and through the heather that lay heavy with moisture upon it. He appeared almost invisible as he walked, his white hide seemingly blending in with the mists that beaded upon him. From his silhouette, in the shape of a man but with cloven hooves, a tail, and broad, sweeping horns set atop a bull’s head, he could be seen to be a minotaur, one of those of the tribes that inhabited that part of the Maedari hill country.

Across one shoulder he carried a heavy maul, part weapon and part ceremonial item, marking his place in minotaur society. The head had been formed of a cylindrical piece of green stone, polished and carved by his own hand with intricate workings, designs and patterns. A solid wooden shaft ran through it, forming a formidable weapon, one too large and heavy for any but a fully grown minotaur to wield to full effect.

The minotaur raised his head and sniffed at the air, his nostrils flaring. The air had the smell of a storm approaching, one of the wild types that could sweep the hill country that formed his homeland with untamed fury. Even for a minotaur they could get bad, as winds howled and raged and lighting streaked across the skies while deluges drenched the ground.

The problem lay in the fact that he had stayed too long at the meeting and the chances, he knew, of making it back to the safety of the village in time before the storm broke were slim. He could not remain outside though during it. Shelter had to be found, and soon.

Not that matters had proceeded unproductive at the meeting, even if unexpected. It had been reported to him that at the site where the new quarry was to be established that unknown creatures had been seen skulking about. As Kwaza of his tribe, the Stonemaul, it had fallen to him to investigate the happenings.

The trip had taken a good half day across the hills to where they had decided to site the new quarry, where good green stone had been found of the type that they enjoyed to work with, exposed when a recent heavy rain had flooded a stream in that part and caused a landslide.

All concerns had quickly been allayed upon his arrival. The creatures that had been spotted were nothing more than a small tribe of goblins, seeking out a new home. The short creatures, with their brown skin, coarse black hair and broad, earnest faces, had crossed from Chelos, in the north, into Maedar, seeking a refuge from the persecution that many of their kind experienced. Plenty failed to see their worth and treated them little better than vermin.

The goblins had been a first skittish around him, uncertain as to the reaction they would receive, a fact that Nhaqosa understood well. Not only was there a size difference between goblins and others, but when you had been treated as poorly as they had, it took time to learn to trust again.

Not until Nhaqosa had spoken at length with their headman, explaining the situation, did the goblins begin to relax around him. He told them of the land and who lived their, and of the quarry to be established. As well, he offered them the hospitality of the minotaurs, an experience they had been sorely lacking, and explained to them that they were welcome to stay, and to help out. While the short creatures lacked the size and strength of the minotaurs, and would not be able to assist in the cutting and hauling of stone from the quarry, there still existed plenty that they could do to assist, and to support themselves and their families.

Nhaqosa had been rather pleased with the arrangement, and the goblins, not used to such hospitality, had responded in kind. The result had been that Nhaqosa had stayed over long, setting off well into the afternoon. He would not reach home before night fell, and as he walked the hills, the weather had changed. He crossed the highland hills and moors in a hurry, but knew that it would be a futile exercise, trying to beat the storm.

Off in the distance, and yet not all too far away, beyond the clouds that shrouded the hills, he heard the deep rumble of a peal of thunder that marked the approaching storm. As if in response, a surge of wind swept across the hills, stirring the clouds and whipping them about. Nhaqosa picked up his pace again. It had a feel of a bad one about it. He needed to find shelter, and fast.

Unbidden, a memory returned to him, one that he had not though of since childhood. Not far from where he travelled there was a cave that he had discovered all those years before when he had been not much older than a calf. Little more than a shallow depression set into a rocky hillside, it at least offered a place to weather out the storm.

Nhaqosa changed directions and headed for the cave as a misty rain picked up, becoming heavier with each passing step. It did not take long until ahead, in the dim light and drizzle, a rocky outcropping reared up, stabbing at the sky, its exposed heights stripped of any growth but simple mosses and lichens. Tumbles of scattered boulders lay around it, forcing Nhaqosa to pick his way through them. The sky flared with a brief, intense light and another rumble sounded over the hills.

Nhaqosa scrambled his way up the slope as the rain whipped at his face, running down his horns to drip to the ground. He came to a sheer rock face, one cracked and weathered. Down low an entrance could be seen, one that a minotaur calf could easily enter but one that now he had to duck to pass beneath.

The interior, oddly, seemed larger than he had recalled, the rear of it lost in the dark and gloom so that he could get no feel for how large it actually was. The floor itself bore a fine, powdery layer of dirt, almost like sand.

A strong wind swirled up in through the entrance, carrying with it traces of rain. Nhaqosa retreated back further into the cave from the entrance to get away from it, attempting to stay dry and out of the wind. The light grew dim further in, reduced to but a bare patch of grey that seeped in through the entrance. He spotted a large, flat stone on the ground in the light. Setting his heavy maul down beside it, he sat down on the stone.

Settling in, he leant back against the wall of the cave and let his eyes fall closed. All he could do was to patiently wait out the storm, until it had blown itself out, and then return to the village.

As he sat there, his arms folded across his broad chest, he heard a low rumbling, deep and rolling, as thunder tore at the sky, and then a new rumbling, though this one not of thunder. A few flakes of stone began to fall down upon him and the roof above started to give a dying groan.

Nhaqosa surged to his feet, snatching up his maul, and began to dash back through the cave towards the entrance. Despite the speed of his reactions, it still came too late. Barely had he taken half a dozen long strides than the first chunks of rock began to fall from above. One struck a glancing blow upon his left shoulder, leaving it and the arm numb, and then something crashed heavily upon his head and he knew no more.