Legion of the Sands – Part Seven 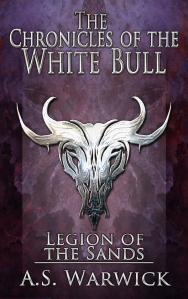 Legion of the Sands

With the gates that led into the compound missing there was nothing to stop the desert men entering the barracks. Nhaqosa and Lakach crouched down low on top of the wall above the gates, remaining hidden out of sight behind the parapets. The desert men came on towards the gates, riding on their strange lizard mounts.

As the first rider made his way through the opening beneath them, Nhaqosa rose up and stepped off. He fell down towards the unaware rider, hooves first, landing on the man and mount beneath. Both were crushed beneath the weight of the giant minotaur, backs and skulls broken. Lakach stood as well, looking out over the parapets towards the city square. He raised his crossbow and snapped off a shot towards the approaching foe. The quarrel sung through the air, punching a rider from his mount as it took him in the head.

Nhaqosa was quickly back up onto his feet, swinging his maul in a brutal upwards arc. It slammed into the head of the mount of the second rider who had entered through the gates, snapping its head back and crushing the face beyond recognition. It went down without a sound, carrying its rider to the ground. Nhaqosa followed up with a vicious kick, his heavy cloven hoof silencing the man before he could recover.

Nhaqosa took a stand in the gateway, blocking the way through. He bellowed an ear-rending challenge as he stomped a hoof to the ground, kicking up dust, while raising his maul high. The sound reverberated loud through the square and brought the desert men to a halt, shocked by the sudden assault of a creature unknown to them. Behind him were sprawled the bodies of two mounts and riders, while ahead of him another mount ran free, its rider lying on the ground, transfixed by Lakach’s crossbow quarrel. Above, the man was at work reloading his crossbow, winding back the string to lock a new quarrel in place, taking advantage in the halt of the advance.

After a moment of pause, and as if response to Nhaqosa’s challenge, the hounds leapt forward, sprinting towards him, eyes aglow. Their chill bays echoed in reply to his bellow. Following in behind them were the giant scorpion beasts, skittering forward on their clawed feet. A crossbow quarrel spat from above, taking out another desert man.

As the first hound came rushing at him, Nhaqosa swung his maul, slamming it into the beast’s side. The thick armour plating of their scales was well equipped to deal with most weapons, but against the heavy bludgeoning from the maul swung by Nhaqosa they could do little. The hound’s side caved as it was lifted from its feet by the force of the impact and tossed aside. A second one ran on in, trying to latch its teeth onto Nhaqosa’s leg. He kicked out, taking it in the head with a solid blow from his hoof, leaving it dazed and unsteady. The maul descended again before the beast could recover, crushing the life from it.

He could not prevent the next one from leaping at him. Pain shot through him as sharp, tearing teeth latched onto his arm, worrying at it as they dug through his tough hide. Red blood seeped across his white hide. Releasing one hand from its grip on his maul, Nhaqosa punched the beast in the face. The grip it maintained never lessened. He punched again, hammering blow after blow until at last the bite relaxed. Taking the hound by one of its horns, he flung it aside.

The flow of the enemy continued as others closed in, while behind the lurking hounds came the giant scorpions, their stingers arched and poised to strike. Nhaqosa steeled himself to face the inevitable. The end result was without question, yet he would stay fighting for as long as he could, to allow time for his friends to escape.

Then the storm hit.