Rats in the City – Part Three 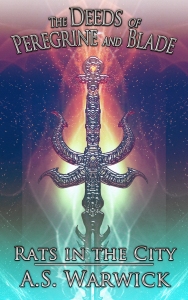 Rats in the City

Part Three – A Hole in the Wall

They tumbled their unsteady course down the stairs, winding around the outer wall of the tower. They heard no sounds from in the tower, but the scrape of feet across the roof above alerted them to the fact that their pursuers had climbed the tower.

As they spiralled down, they passed by open doors that led into empty rooms. It became apparent to them that the tower had been abandoned, home only to dust and webs.

“I take that this will lead us somewhere,” Peregrine said as she led the way down, rusty short sword held before her.

“I do hope so,” Blade replied. “There must be a door or something at the bottom.”

“Then there is always your rock, where ever that is.”

“All the way down the bottom, I would expect,” Peregrine replied cheerfully and sprang down the steps two or three at a time, careening a dangerous course. Somehow the pair made it all the way to the bottom with falling, reaching the lower floor. Dust lay thick across the ground, and webs in profusion were strung between ceiling and walls. At the base of the stairs sat the stone Peregrine and thrown through the trapdoor, partially shattered after its wild tumble down the stairs. The arcane light pulsed and dimmed as they looked about, casting weird shadows through the room. There was a doorway there, across from them, set with a heavy wooden door within. Peregrine slashed a way through the webs as she made her way across to it. Taking hold of the handle, she pulled at the door. It budged and groaned, the wood having swollen and causing it to become stuck, but there was no sign of it being locked.

She tossed the sword to the ground beside her. “Give me a hand.”

Together they took hold of the door and heaved at it. Slowly, and noisily, the door broke free and opened. On the other side, instead of the way out, they saw that the exit had been bricked off. Peregrine kicked at it then hopped away, her toe ringing from the blow.

“It is a bit more than that,” Peregrine told him as she picked up the sword again. She made her way back to the foot of the stairs and there prepared to make her stand, to fend off those that would come down it. There they could only come at her one at a time. It was not in her nature to surrender, but to fight until she had strength no more, defiant to the end, and yet she would not do so recklessly, but to take maximum advantage of what the surrounds had to offer.

“There is something unusual about this place,” Blade commented. “There are footprints here.”

“We were just walking around,” Peregrine pointed out. Already she could hear the scamper of feet making their way down the stairs, cautiously by the sound of it.

“No, not ours. They are too small for that. Someone else had been here.”

“How did they get in?” Peregrine asked. “The trapdoor was locked. At least I think it was.”

Blade went to tap the side of his nose and missed. “Good point. There must be another way in.” He pushed further into the room, spinning around to brush off the webs that had draped over his fine clothes. The light bobbled along behind him. In the dark recesses of the room, he stopped and peered down. “Over here.”

Peregrine hesitated at the foot of the stairs then backed away, heading over to join him. As she looked to what he had seen, she saw a hole in the wall, one not overly large, but one that could be crawled through, if only.

“Big mouses then,” Blade pointed out.

“I think you are right,” Blade said brightly. “Of course, it is going to make it tight.”

“Just get in there, before our guests arrive,” Peregrine told him.

Wonder where it leads,” Blade mused. Reluctantly he got down onto his belly in the dirt. He shoved the ball of arcane light ahead of him into the hole.

“It does not matter much, as long as it is away from here.”

With a sigh, Blade began to crawl into the hole in the wall.