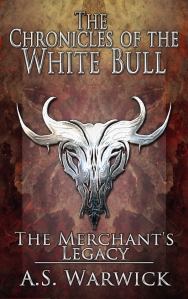 The band spread out along the perimeter of the clearing, amongst the eaves of the trees, moving into position as quietly as they could, their weapons in hand. Nhaqosa stationed himself with Lakach and the three others who accompanied him, two who carried crossbows and the third equipped with a short bow.

“Now,” he said softly. The crossbows were raised, their wielders taking sight along them, aiming at the bandits. Fingers curled around triggers and pulled. There was the sound of a dull thunk as the crossbows shot, and the whistle of the bolts cutting through the air. Against stationary targets who were unaware they were being targeted and within close range, none of the shots were difficult. All three crossbow bolts struck home, throwing the bandits slumping to the ground with barely more than a rasped gurgle escaping from them.

Nhaqosa surged forward from out of the bushes, running low to the ground, maul at the ready. As he emerged into the clearing, the others began to follow him in from all around, making only the barest of sounds as they went. Some made for the huts, while others raced to join Nhaqosa near the burning fire.

Nhaqosa stood there, looking around. All seemed to be going well as the fighters slipped into the huts. Then, startlingly, a sudden loud shout echoed from within the cave, the alert raised. From it came boiling a mass of men, screaming as they ran.

Nhaqosa reacted in an instant, charging at the lead bandit as he roared his own challenge, his great maul arcing through the air as it was swung with all of his considerable strength.

It took the first bandit fair in the face, his skull crumpling under the impact as if it was little more than a fragile egg shell. His head snapped back in a spray of blood and shattered teeth. Feet went out from beneath his as the blow shockingly interrupted his forward momentum and he flipped through the air before landing face down upon the earth.

The reaction of Nhaqosa, and the brutality of his blow, momentarily stunned the bandits into inaction. Nhaqosa slowly raised his gore-stained maul above his head and opened his maw in an ear rending bellow. Men flinched in the face of the roar and inched back almost instinctively, the chill touch of terror scraping down their spines. Sensing an opportunity, the gladiators with Nhaqosa swarmed forward, eager to engage the flat-footed bandits.

The fight that followed was short and brutal, yet at the same time Nhaqosa found a disturbing poetry to it. The gladiators had been taught to kill well, and that they did, but more than that they had been taught to entertain as they killed; the flashy blow, the mocking word, the elaborate tumble, all but part of the show.

Nhaqosa watched as Niati walked unhurriedly towards her opponent, her slender blade down at her side, leaving herself open. The bandit, unable to resist the opening, ran charging at her, axe raised high, screaming a challenge. At the instant that he swung, attempting to bury the axe in Niati’s head, she stepped lightly aside and spun on her heel, allowing the man’s momentum to carry him passed, the axe slamming into the ground. She pirouetted as he went by, driving her blade through the back of the man’s neck, the tip emerging from the front of his throat in a bloody spray.

Another, Alyan, the oldest of the band, taunted his opponent, jeering at the man as he swung wildly, mocking his efforts as time and again his rusty sword missed its target. Each sword came more and more erratically from the bandit until Alyan stepped in and, with vicious precision, drove his twin blades home.

Nhaqosa had known some of the fighters in the pits who had revelled in prolonging the agony of their opponents, killing a man slowly, cut by cut, until they were reduced to a weeping, bloodied mess. Nhaqosa would have none of that, not while he led the band. They were to kill clean, and quick, as best as possible, and they did, yet they still were not above the show, even if they no longer killed for the entertainment of others.

The bandits, so used to ambush and preying upon the weak and defenceless, stood little chance against the hardened warriors of Nhaqosa’s band. The explosion of channelled violence ended in a matter of moments, the bandits dispatched almost before they could consider the circumstances in which they found themselves. Nhaqosa looked around the clearing with concern once the battle had ended, checking on his people. Beyond a few minor cuts, all had emerged unharmed.

There had been only a dozen of the bandits within the camp, and all the huts had proved to have been unoccupied. The band they were tracking was much larger than a mere dozen, the whereabouts of the rest remaining something of a mystery. Nhaqosa growled and shook his head, berating himself for not having thought to have one of the bandits taken to question.

“What now, boss?” Lakach asked. He ran his hand over the body of one of the dead bandits, searching for any valuables the man may have carried. From one finger he slid a ring, held it up to examine it, then slipped it into a pocket.

“This is not the full strength of the bandits, and we do not know where the rest are,” Nhaqosa told him. “We do know where they will be.”

Lakach grinned through his red moustache. “That makes sense, and an almost poetic justice. The ambushers ambushed.”

“Yes. Go and find Oliat and help him bring Katako in.” He pointed to three others. “Remove the bodies. The rest, with me. We will see what the cave holds.”