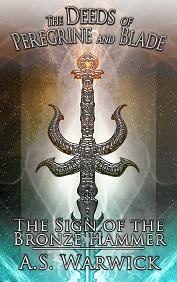 Part Eight – A Path Through The Wild

Together the pair headed in through the trees, along a path that barely existed, winding deeper into the grounds of the estate. A change came over Peregrine as she entered the wild gardens, a subtle shift in her character. She walked with a lighter step and with less tension about her body, appearing to glide as she moved. Blade had the feeling that she belonged in a place like that, in the wild places, as much a creature of it as any animal.

Then she stopped and held her hand aloft, her body on alert. “Did you hear that?” she asked quietly.

“Hear what?” Blade replied. He accounted himself sharp with his senses and yet he had picked up on no sounds that could have alerted his Aedring companion beyond the breeze in the branches which set them to swaying.

“This way,” said she and plunged off the path, pushing through the clinging undergrowth that grew tangled thick beneath the trees. Despite it, she moved with barely a sound, stalking like a wolf through the wilds.

Their passage led them by gnarled old trees, their trunks much twisted and knotted, so that at times it appeared almost as if faces peered out at them from the bark. The heavy branches above rustled and swayed and sang low, disturbing sounds. Still no other sounds came to him.

Then they stepped out from beneath the trees into a clearing. In the middle rose a tall standing stone, much covered in moss, its base buried in the ground, and there he head the sound of wooden chimes. In a nearby tree a number of chimes hung, and these rang in the breeze. They were soft, to be sure, but he had not picked up on them, a fact he found most curious.

“There is something on the stone,” Peregrine announced after a quick survey of the clearing. They walked over to where the stone stood, rising taller than either of them, to look closer at it. Beneath the moss, a few scratches on its surface could just be made out. After setting down the package, they began to clear the moss away, gradually revealing words that spiralled inwards from the edge of the rock towards the centre.

“What does it say?” Peregrine asked.

Blade was not surprised that she could not read them, for few would have been able to. “It is an old dialect of Navodian,” he explained, “One that has many similarities with Cahadian, and has not been spoken in centuries. The two languages are related, and it is theorised that they are descended from the same source.”

“Fascinating,” Peregrine replied, sounding anything but enthralled. “What does it say?”

Peregrine laughed in response. “You do not know the old legends?” she asked.

“I know of many legends, yes, but for the sake or brevity let us say that I do not know the one that will answer this puzzle.”

“It is the sky,” she answered with confidence.

“It would seem the logical answer, yes, but how did you come by that conclusion, and what exactly is this legend?”

“There is an ancient legend I heard in my youth, telling of three great hunters, all brothers, who once roamed the world. They disputed as to who was the greatest of them and so they set forth to display their prowess. All proved too much for them, and all fell in their attempts. Yet from each rose a part of them, the best part, and it became one part and so the sky was born.”

Peregrine shrugged, unconcerned. “Sense or not, it is the answer. How does it help us though?”

Peregrine walked around the stone, looking it over, and then the trees that ringed the clearing. After two circuits, she stopped and set her shoulder to the stone. Bracing her feet, she gave a forceful heave. It resisted for a moment, her feet digging into the earth, but then it toppled over, ripping up the ground around its base.

“What did you do that for?” Blade asked, curious as to the reasoning behind the incident.

Peregrine cleared away some of the earth that clung to the base of the stone with her foot. “There may be more to the message,” she said. “There.”

On the part of the stone that had been buried beneath the earth, another word had been inscribed. Blade went down on his haunches to read it, rubbing the last of the earth clear with a gloved hand. The word was, as expected, sky, but in that much older dialect, it sounded the same as another word; mystery.

A part of him recoiled at the understanding of just what the message meant, and what he needed to do, for now it was obvious to him. He had to once more touch the Mysteries, to summon forth the magic that he had promised himself never to delve into again.

With great reluctance he spoke. “I know what to do.”

Peregrine looked across at him with an intense amber eyed stare. “What?”

The pouch of dust that he had once always worn had been discarded and so he took up instead a pinch of earth from the ground. He worked it between his fingers to break it down to a fine a form as he could. This he sprinkled over the word before taking in a deep breath. Steadying himself, he began to hum a tune, one broad and sweeping and majestic, much like the sky itself, a tune filled with the hints of summer warmth and winter storms and all that lay in between.

As he did, the earth he had sprinkled began to tremble in response, at first resisting his efforts, forcing Blade to put more of himself into the tune and the effort. But then it began to hiss and glow and the words upon the stone began to shine with a pale aqua light.

Peregrine stepped back at the display, her eyes tightening and her hand closing on the hilt of her sword. She did not exhibit signs of fear, for an Aedring feared nothing, but there was concern there, in the face of the display of the unnatural.

The tune ceased and Blade stood back up, looking over to her, though he said no words.

A low groaning noise began, and they turned to look to whence it came. Through the trees, a path opened up before them. The trees parted as if they were a curtain being thrown back. Taking up the package, the pair headed through the now unveiled path, Peregrine once more in the lead. They had not travelled far when the path led out from beneath the trees and before them they saw a house, a sturdy place of two stories constructed of pale grey stone, yet not any more extravagant than any other house on that ward, being the house of a well-to-do craftsmen rather than a merchant or noble. The ground around the house was scattered with pebbles, while the windows were shuttered and the door closed.

“At last we are done with this,” Blade stated, relieved that they had come through to the house.

“Do you really think that this is at an end?” Peregrine asked, somewhat amused.

“No I guess not,” Blade replied with a morose sigh. “I hope that it is for I have much to be doing.”

“And what is it that you do?” Peregrine asked, walking up to the closed doors at the front of the house.

“What any of us do,” he told her. “Try and survive, by whatever means it takes.”

Peregrine laughed at that. “You lowlanders do not know what trying to survive means.”

“Cities can be just as dangerous a place as out in the wilds,” Blade told her. “If you do not know the ins and outs of them, the people to talk to and to avoid, the places to go, where you can obtain needed commodities, the powers, both seen and unseen, then you may not survive long at all.”

“It can be a confusing place, from what I have seen from my time here,” Peregrine admitted, “But it is all a construct of civilisation, a danger that you have made for yourselves and not one of nature.” With a foot she pushed against the door and it slowly swung open. “Almost as if we were expected,” she mused.

“That makes me suspicious,” Blade commented.

“I am always suspicious, and cautious,” Peregrine stated. Carefully she started to step through the door. “It is how I stay alive.”