Wisdom From The Ashes – Part Two 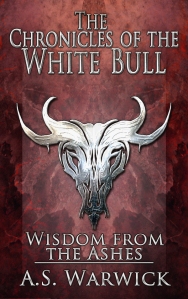 Wisdom From The Ashes

There were dreams. There were always dreams, and none of them were pleasant. The line between the waking and sleeping hours seemed almost to no longer exist, all of it much like a hazy memory that ran one into the other and back again. Everything seemed to blur together, dreams of pain and fire that clawed at him and sought to drag him under. Occasionally voices came to him, sounding much like flies buzzing off in the distance. The word they spoke made no sense.

Nhaqosa looked out over an endless plain that stretched on out before him, bleak from horizon to horizon. It was barren and rocky, the sun beating down on the lifeless soil with unbearable heat. Not a scrap of life could be seen, only rock and hard red earth, cracks spreading out over its surface.

A haze shimmered in the distance, the horizon blurred so that he could not tell where sky ended and earth began. The sky above was a cloudless, washed out blue. There was not even a hint of a breeze and the air hung sullen and oppressive. Each breath seared at his lungs with the hot air.

There were no landmarks to be seen anywhere, nothing to guide the path ahead, merely a vast and empty expanse, flat and endless.

Somehow he knew that he had to cross the desolate and infinite plains. Deep down there was a tiny urge pressing him forward, to seek out something that he could not see. Where he was headed, he did not know, only that he had to complete the journey, to reach some nebulous point of safety, if such a place existed in the land he found himself in.

He began to walk. Each step he took was an agony of fire and lancing pains that seared through his body. His right leg was twisted and could barely support the weight he placed upon it. His maul was terribly heavy in his crippled hand and it scraped along the ground behind him, gouging a groove out of the earth. He could not drop it though, no matter the weight or the pain it brought to him, or how much it slowed his steps. It was part of him, and he part of it. Without it he was nothing. It was not fused to his hand or attached by any other means and yet he could not abandon it without abandoning who he was.

Step by slow step he made his way across the emptiness that spread out to forever before him, through the heat, just as he had every other day and night without cease. The heat parched him cruelly, leaving his lips chafed and tongue swollen. Sweat stained his hide, rolling down in torrents. The sun glared blindingly bright off the barren soil. Even with his eyes all but shut the light lanced through them, stabbing into his brain.

He gradually became aware that there was something different this time, a change that slowly made its way through the dullness of though and the blinding aches of his head. Far off in the distance behind him, almost totally obscured by the haze that shimmered across the horizon, another figure was walking. It came his way and slowly gained ground on him.

Fear touched the heart of Nhaqosa. He had to get away from the figure, whoever it was. Gritting his teeth against the pain of his crippled leg, he tried to increase his pace. His leg screamed in agony though he did not cry out. He must not cry out.

And onward he walked.